Which Plants Are Poisonous To Pets And Children? 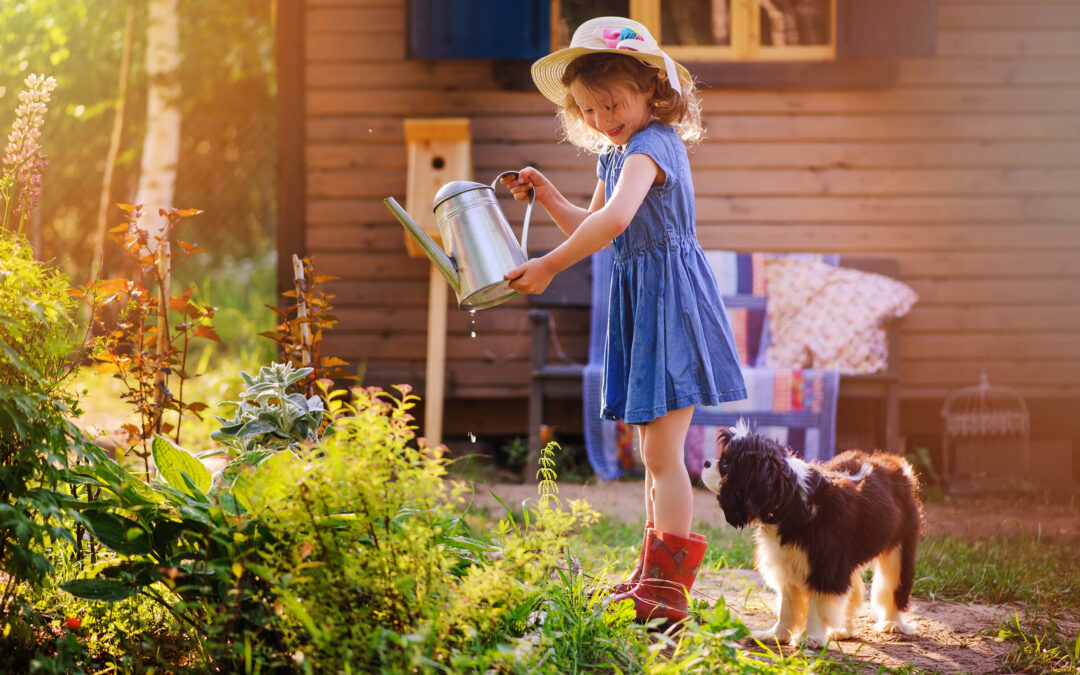 Some of our favorite Central Florida plant species are poisonous because it’s their only defense against getting eaten. Most animals will avoid them because they taste bitter, yet there are times when young animals and children will chew on them out of curiosity, which can lead to illness and even death.

Knowing if you have poisonous plants growing in your yard is a responsibility you should not take lightly.

Even if you don’t have any pets or children, it’s still vital knowledge in the event a visitor brings along their loved one.

Beware of these dangerous beauties! 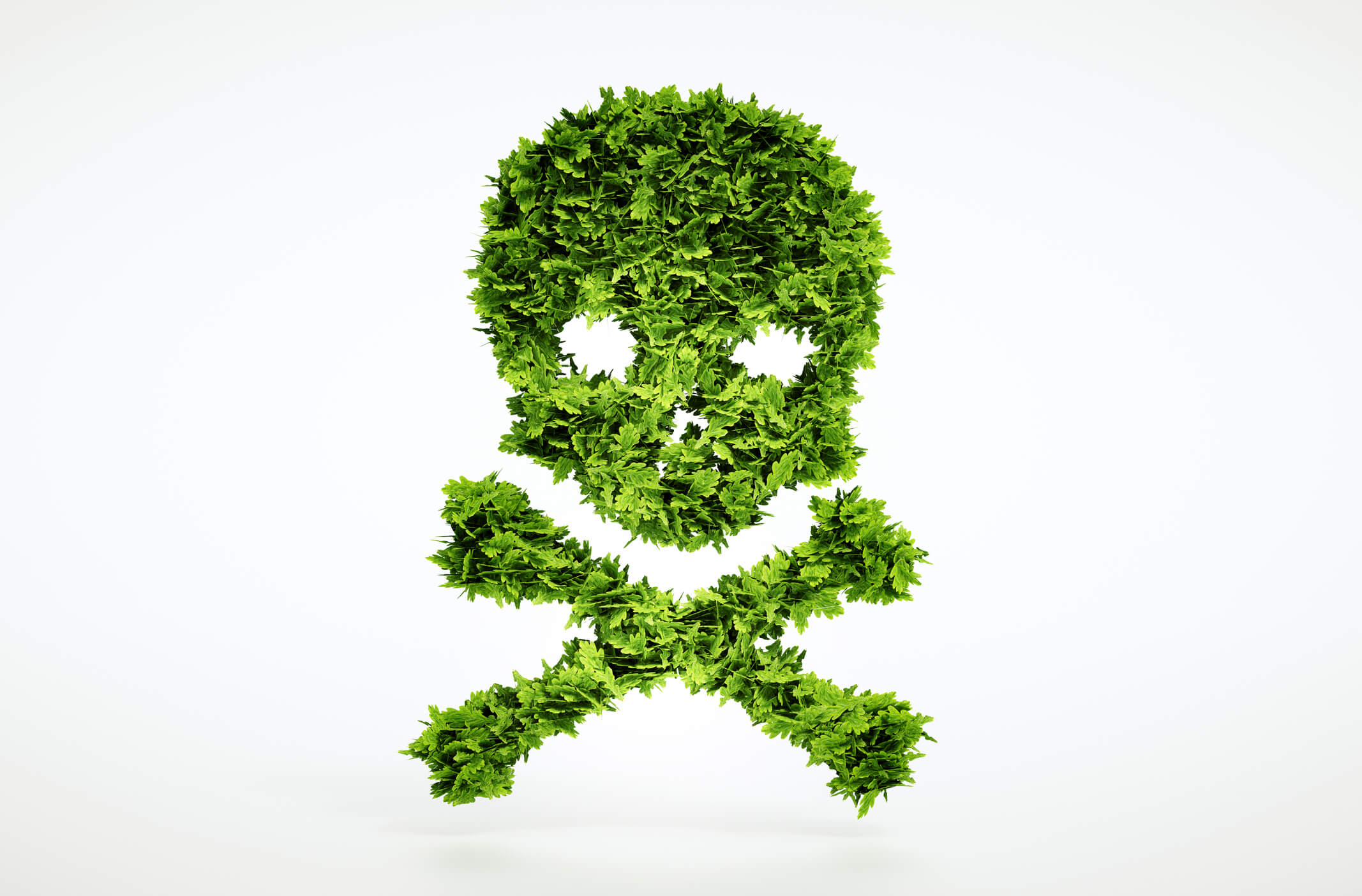 Azaleas – All parts of this flowering shrub are poisonous to pets. The toxins affect the stomach and intestines. Symptoms include nausea, weakness, and salivating. The good news is that death is a rare occurrence. Azaleas aren’t necessarily dangerous to adult humans because the toxins are broken down in the digestive tract, but children can be harmed because their systems aren’t able to process the plant’s poisons. 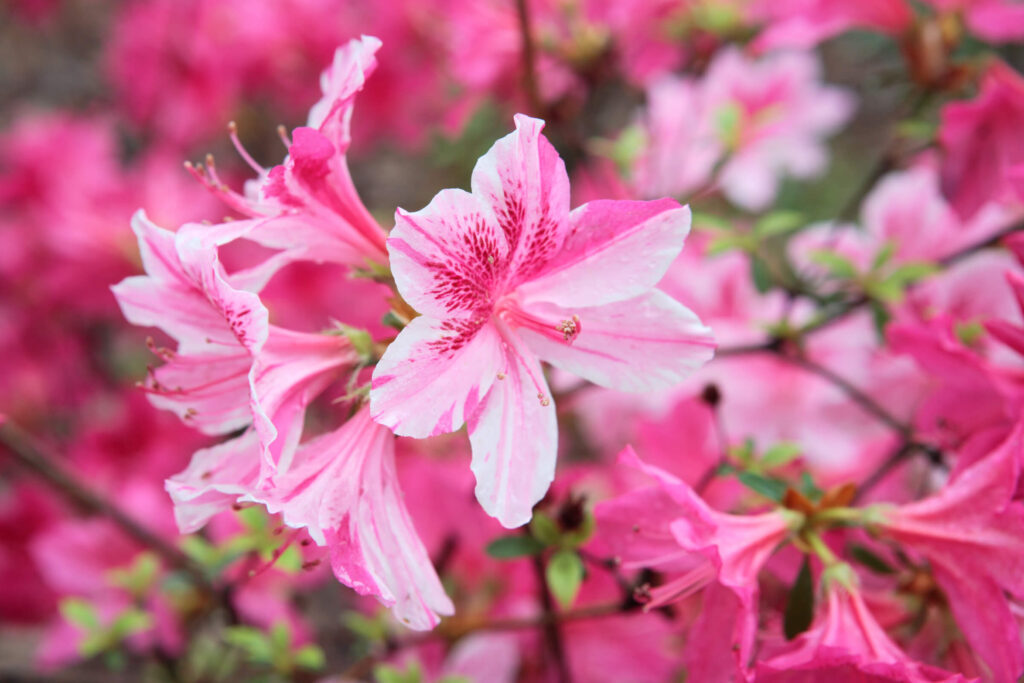 Begonia – This pretty flowering plant is toxic to both people and animals. The underground parts of wax begonias are poisonous. Meanwhile, tuberous begonias have toxin in their tubers. This variety also contains a noxious biochemical component called cucurbitacin B. When begonias are ingested, symptoms can include an intense burning sensation of the mouth, throat, lips and tongue; excessive drooling, choking and swelling of the throat, and inability or difficulty swallowing (dysphagia). These symptoms may continue to occur for up to two weeks after ingestion.

Bracken Fern – All parts are this plant are poisonous to people and animals, especially the roots. Its toxin causes vomiting, diarrhea, abdominal pain, and skin irritation. When ingested by horses, it causes vitamin B1 deficiency, which leads to a high fever and lack of coordination. When cows consume this plant, they’ll have symptoms that include hemorrhaging with swelling and bloody waste. Sheep and goats are less susceptible to the toxin. While poisoning usually occurs over multiple exposures, it’s best not to take any chances and remove this plant from your landscape. Take note that the following ferns are also poisonous: emerald, emerald feather, lace, plumosa, asparagus, racemose asparagus, sprengeri, and shatavari. 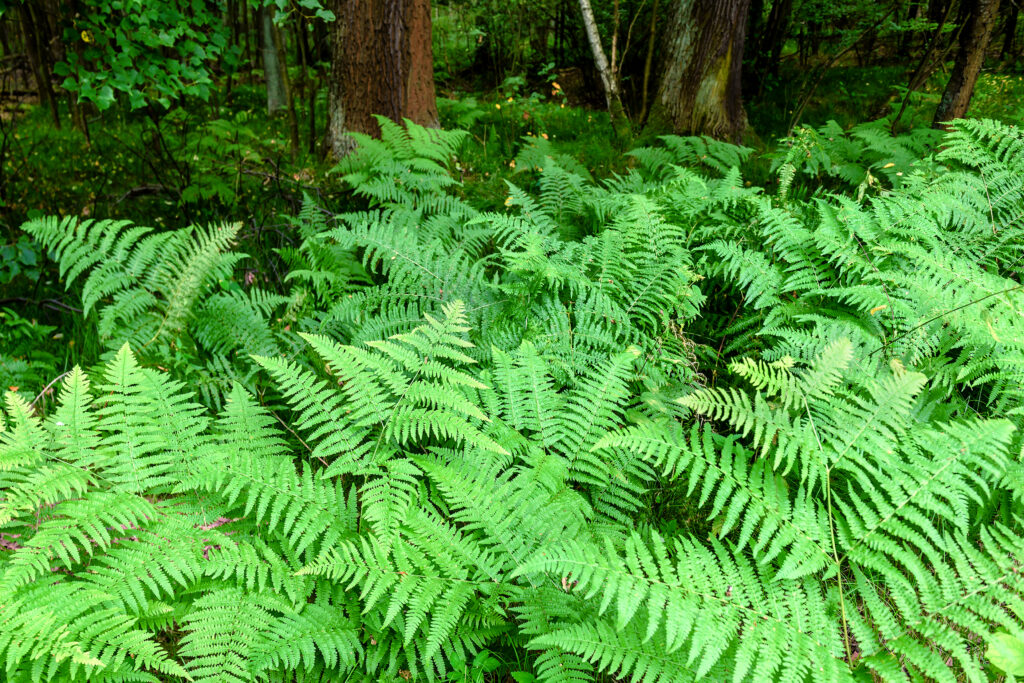 Cherry (all species) – Even if you didn’t plant have this tree in your landscape, it may appear one day out of the blue since its seeds are easily spread by birds. It’s highly toxic to all animals and people because cyanide is produced in the leaves. Wilted leaves are the most poisonous. Once ingested, staggering and convulsions begin within 15 to 30 minutes, and death often occurs within one hour. It’s smart to check your landscape often to see if this tree has taken root on your property.

Coffee Senna – This low-growing perennial plant produces yellow flowers with dark brown fruit and seeds. All parts are poisonous, but the seeds harbor most of the toxicity. Symptoms include wasting and dark brown urine. Poisoning usually happens after the fall frost because coffee senna stays green while Bahia and Bermuda grasses have turned brown, which makes it attractive to animals and children. This plant is considered invasive, so check your yard often to make sure it hasn’t sprouted up anywhere.

Crotalaria aka Rattlebox – Every part of this flowering plant is poisonous, but the seeds are especially toxic. Once ingested, weakness, confusion, and jaundice from liver damage can occur. It’s not uncommon for animals to die months after eating this deadly plant. 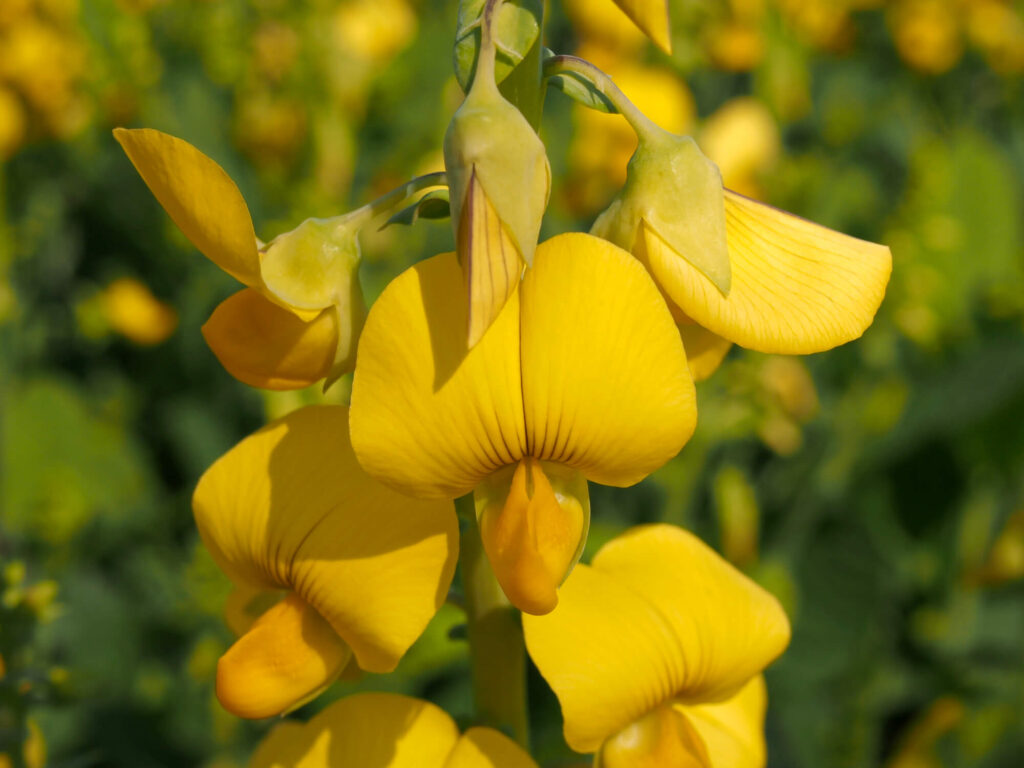 Hemlock – Most people know this deadly plant by name, but it’s important to know how to identify it. It is often found growing along fence lines, barns, and stables. If found, pull up the entire plant with its roots or spray it with an herbicide. Check the area regularly to make sure it hasn’t come back.

Iris – These gorgeous herbaceous perennials are toxic to animals and people. The entire plant is poisonous. While symptoms are generally mild in humans, it can cause serious illness and even death in animals. Symptoms include increased salivation, diarrhea, vomiting, decreased appetite, ulcers, and sores in the muzzles and lips of the animal as well as bleeding of the stomach and small intestine.

Lantana – This toxic ornamental is found practically everywhere in Central Florida. The entire plant is poisonous to pets and people. When it’s consumed in large amounts, it can lead to serious illness and even death. When small bits of the plant are eaten, symptoms include mouth sores and skin cracking.

Milkweed – This extremely toxic plant is becoming more common in Central Florida because it’s essential to the survival of monarch butterflies, so many people have started growing it in their yards. All parts of the plant contain toxic cardiac glycosides. Ingested in small amounts, symptoms include nausea, diarrhea, weakness, and confusion. When it’s consumed in large amounts, seizures, heart arrhythmia, respiratory paralysis, and even death can occur. If you want to grow milkweed to help monarch butterflies, keep pets and children away from it by surrounding it with chicken wire.

Nightshade aka Bella-donna – The berries are the most toxic part of this plant, especially when they’re green. The toxins can affect animals and humans, and symptoms include wasting and gastric distress. The plant’s leaves and berries taste terrible, so animals will rarely eat enough to cause death. Regardless, but it’s best to not have it growing in your yard at all.

Oleander – Every part of this gorgeous landscape specimen is extremely toxic to animals and people. The toxins affect the body’s digestive, nervous, and vascular systems. Symptoms can include fever, headache, decrease in heart rate and blood pressure (hypotension), nausea, vomiting, diarrhea, pain in the stomach and abdomen, confusion, disorientation, numbness and loss of sensation, vision abnormalities including blurred vision, skin rashes and hives, and feeling dizzy or faint.

Perilla Mint aka Rattlesnake Weed aka Purple Mint – This plant is highly toxic to dogs, cats, livestock, and people because it contains ketones that cause lung inflammation and impair respiration. The flowers are the most poisonous part of the plant. It’s commonly found in wooded areas and waste lands, but it’s important to check your yard often to see if any has cropped up naturally.

Pokeweed – All parts of this Florida native perennial contain saponins and oxalates, which cause severe gastrointestinal irritation in people and pets. The roots are especially poisonous. As the plant ages, its toxins become more potent. Symptoms include salivation, vomiting, inappetence/refusal of food, diarrhea, tremors, and drop in blood pressure.

Red Maple aka Japanese Maple – This beautiful tree isn’t poisonous to dogs, cats, and humans, but it is a danger to horses. While the toxin in red maple leaves has never been identified, it causes severe anemia that results in weakness, depression, pale to yellow mucous membranes and dark brown to red urine due to the hemoglobin that’s released as the horse’s red blood cells are being destroyed. These symptoms can appear anytime between 18 hours to five days after ingestion. If you have horses, it’s best not to grow this tree in your yard.

Sago Palm – All parts of this landscape specimen are toxic to humans and animals, but the seeds are the most poisonous. Symptoms include gastrointestinal irritation, depression, drooling, vomiting, diarrhea, weakness, wobbly gait, tremors, dark urine, enlarged abdomen, increased thirst, nose bleeds, blood in urine and stool, and seizures. Death can result if medical treatment is delayed. 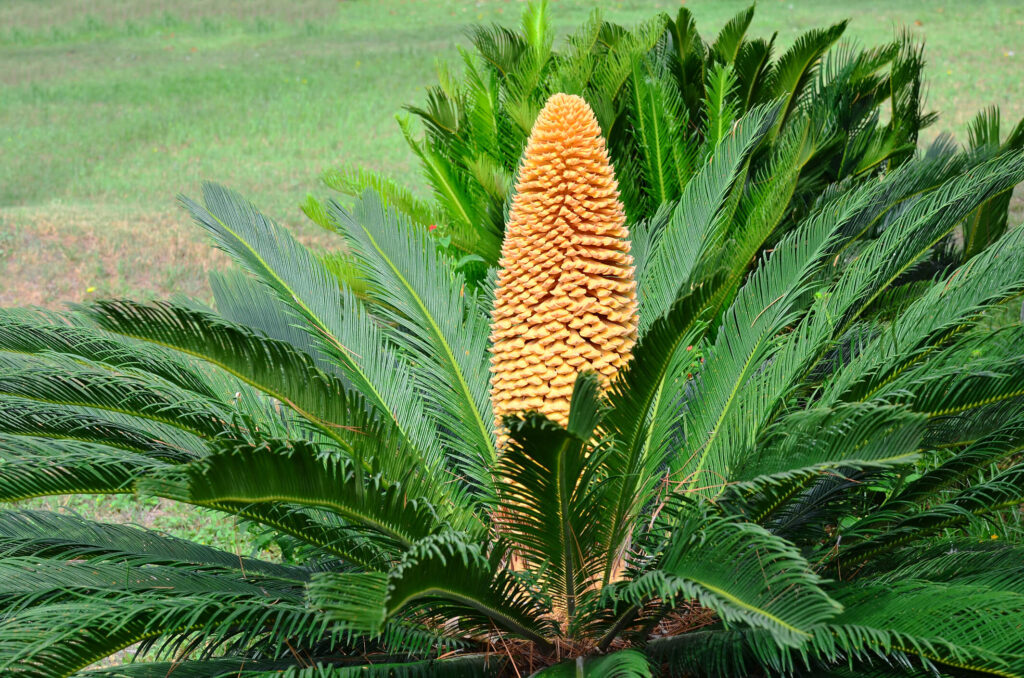 Yellow Jessamine – All parts of this beautiful vine are toxic to people and pets because it contains neurotoxins. Once ingested, symptoms include muscle weakness, paralysis, decreased respiration, hypothermia, difficulty swallowing and breathing, vision problems, seizures, and death.

These are the most common toxic plants found in Central Florida; however, several others are known to thrive here. Therefore, it’s important to do your own research. If you have unknown plants growing in your yard and have concerns that they may be poisonous, use your smart phone to download a plant identification app. You’ll know what they are in a snap!

When you’re checking your property for poisonous plants, take this opportunity to make sure your irrigation system is working properly. If it isn’t running like it should, call us or complete our request service form and we’ll come take a look.

Take immediate action if you suspect a pet or child has eaten a toxic plant!

There are many beautiful plants in Central Florida that will make your landscape look like a dream, but if they’re poisonous, a nightmare scenario can unfold when a curious pet or child decides to taste them.

It’s best to remain vigilant by always supervising children and pets when they’re exploring the yard.

If you suspect a child has consumed a toxic plant, call 911 right away. You can also get in touch with the American Association of Poison Control Centers (1-800-222-1222) to learn what you can do to slow or interrupt the progression of the toxins while you’re waiting for the ambulance to arrive.

If you’re worried that your dog or cat has eaten a poisonous plant, take them to the vet immediately. You can also contact the Pet Poison Hotline (1-800-213-6680) to find out what actions you can take to delay the effects of the plant’s poison until you can get them professional medical attention.

Thank you for taking the time to read this important information. While we want everyone to have a beautiful garden and healthy landscape, our first concern is the safety of children and pets. We can’t stress enough the importance of learning about the plants in your yard and if they pose a danger to your loved ones. In the meantime, if you ever need assistance with sprinkler repair or irrigation in the Orlando area, we’re always happy to help!